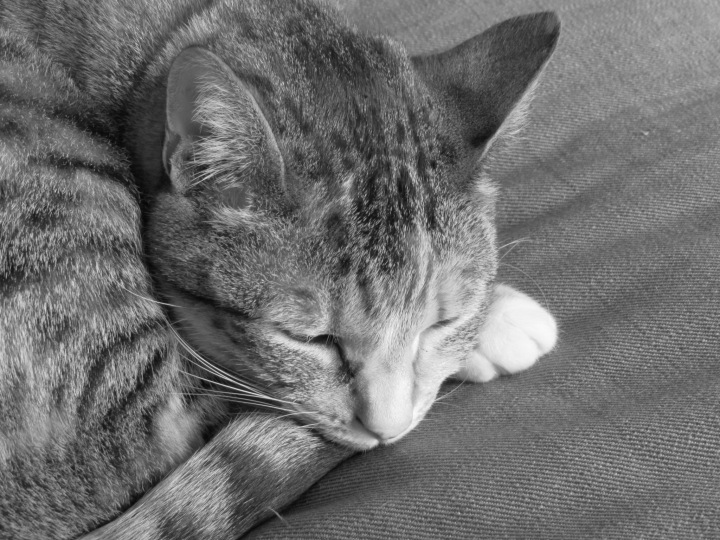 Almost as soon as I’ve successfully survived the bedtime routine with both toddler and baby, the cat makes her appearance.

She spends most of the day asleep upstairs, or mewling in front of the back door waiting for me to open it so she can… continue to stand in front of it.

When she sidles up to me her agenda is clear, maximum cat-human contact. I can’t handle it. I want to throw her out the window. She tries to deny me the only personal space that I get.

When I’m not carrying baby, or feeding baby, I’m fielding questions from toddler, alternately chasing and cuddling imaginary tigers, and having conversations with toddler where I pretend to be the voice of baby/toy hippo/a small cart for building blocks that toddler has decided is his pet dog. I’m sure if the cat had any idea how busy my day has been she would cease trying to climb into my lap while I’m expressing milk.

Seriously cat.. give me a break.

So I shove her aside.. and then the guilt sets in. Not about the cat as such. She’s a trigger for another type of guilt.

I heard people talk about this thing called the guilt of motherhood and I always assumed I was to selfish to feel that. That I wouldn’t be get hung up on doing a perfect job of raising my kids. That is was something neurotic mums felt. Or bad mums. And I was never going to be a bad mum.

Except it feels like that sometimes. Not overall. It’s not like at the end of the day I reflect on how I did that day and rate myself out of 10.  But in the moment. In the moment when you finally got baby down for that nap and the toddler is still asking you to play the game with him that he’s been asking for since breakfast. And you still don’t want to play.

Earlier you told him it was because you needed to feed the baby- now it’s that you’d rather have a cup of tea and mindlessly scroll through facebook for a few minutes.  You’d really rather not pretend to be digging up a road with a spatula. But you’re supposed to want that second one aren’t you? Won’t these be the moments you’ll regret that you missed in years to come?

When you’re home alone with the babies, the phone becomes a connection to the outside world. The adult one. In its best use it allows me to connect with other mums in the same situation, allows me to communicate with friends at the other side of the country, of the world. It allows me to feel for a moment like I’m part of a global force of mamas all rooting for each other through unwashed hair and bleary eyes.

It’s hard to let go of that and just be in my own kitchen.

In its just less-than-best use, the phone becomes a distraction, a barrier between me and my kids.

In its worst use, it becomes another means of comparing myself unfavourably to others- Mums who appear to be doing this whole thing more gracefully than me, people whose lives look more exciting, more daring.

Wouldn’t it feel great to let go of that and just be in my own kitchen?

I feel an experiment coming on. A digital detox of sorts. Or a limiting of phone time in order to free up my mind. Make me feel the importance of what’s going on in front of me, and maybe increase the quality of the time with my kids.

What if it could feel like the most important place in the world was my own kitchen?

That cat though. Get off the keyboard now.